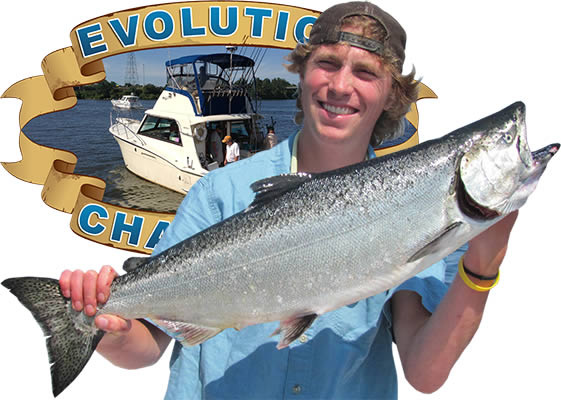 Our Lake Michigan fishing charters understand the variety of fish species that live in the lake. It was originally home to lake trout, yellow perch, panfish, largemouth bass, smallmouth bass, bowfin, as well as some channel catfish, blue catfish and flathead catfish. In recent years over fishing has caused a decline in lake trout, ultimately causing an increase in the alewife population. As a result, coho or silver salmon and chinook salmon were introduced as a predator of alewives to decrease the alewife population. This program was so successful that the salmon population exploded, resulting in Michigan and the states surrounding Lake Michigan legalizing salmon snagging. This practice (thank god) has since been made illegal in all of the great lakes states with the exception of a limited season in Illinois. Thanks largely in part to The Grand Haven Steelheaders Association, Lake Michigan is now being stocked with silver salmon (coho), steelhead, king salmon and brown trout. 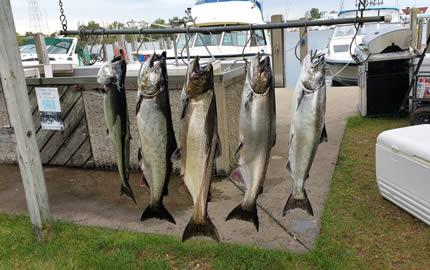 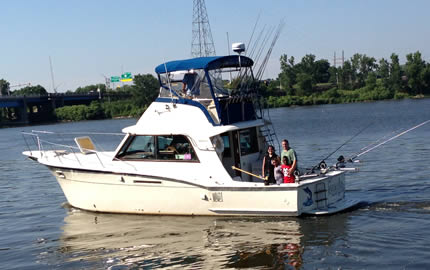 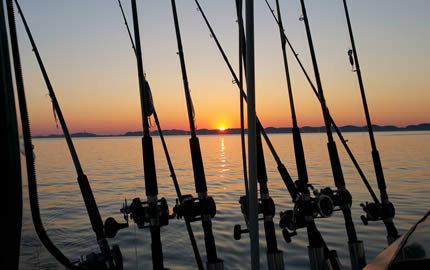 Grand Haven is now a very large vacation town, pleasure boating, charter boat fishing and a coast guard community. The city has over 100 miles of cycling trails, with a state beach with lighted boardwalk assuring romantic strolls at waters edge, a pier for anglers on both sides of the Grand River and Lake Michigan where anglers catch perch, brown trout, steelhead and king salmon. Grand Haven is the port for an exclusive charter fishing fleet at Grand Isle Marina. This is the home port for the Evolution Lake Michigan fishing charters. Grand Haven is also a Great Lakes sand port, Glass sand is plentiful here and shipped all over the world.

Grand Haven is now an active vacation destination. The city has over 100 miles of cycling trails, a state beach, lighted boardwalk at waters edge for romantic strolls and where sunset views are spectacular. The Grand Haven lighthouse is a photographers dream shot. Grand Haven also has two channel piers where anglers catch perch,salmon, Lake Michigan brown trout and steelhead, Grand Haven is also a Great Lakes port, where it imports limestone, slag for road construction, coal for there board of public works power house, Grand Haven also exports glass sand around the world. Grand Haven is a destination point for inland vacationers from inland cities of Michigan such as Grand Rapids. Many vacationers visit regularly to take advantage of the awesome Grand Haven Lake Michigan beach, State park, campgrounds, restaurants, and night life. 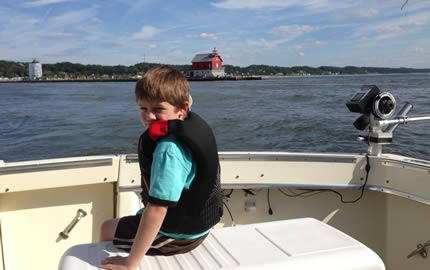 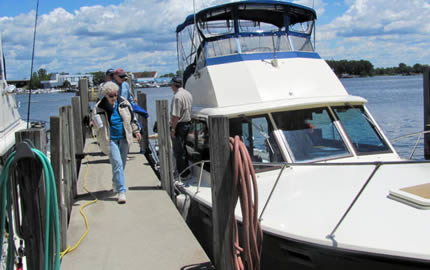 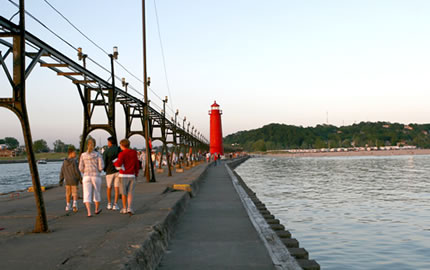 Grand Haven State Park was nationally recognized for having one of the top five beaches In summer. Water temperatures at Grand Haven can reach the low 70s attracting thousands of visitors. These visitors are a huge boost to the local economy. The state park also includes a camping area right on Lake Michigan, you can walk from campsite right to the pier and lighthouse. In addition, the city features a snow ski park. The waterfront locations bring vacationers from all over the country for pleasure boating, sailing, jet skiing, and wind surfing.

Grand Haven is home to the United States Coast Guard, The first Coast Guard presence in the city was in 1924. Grand Haven holds the annual Coast Guard festival and the attendance for this event exceeds 200,000 people over the two-weeks of the festival. Grand Haven is the only city officially designated as “Coast Guard City by Bill Clinton and signed by the president on November 13, 1998.

The Grand Haven Musical Fountain was built on the opposite shore of the Grand River directly across from the down town area in 1969. It plays nightly during the summer season. When it was built, it was the world’s largest such fountain. Grand Haven is a destination point for many visitors of Mid Michigan cities and people of West Michigan. Many people from Grand Rapids and Detroit visit regularly to take advantage of the Grand Haven Lake Michigan beach, State park, restaurants, night life and many even have summer homes along the Grand Haven beach where they spend there summers relaxing. 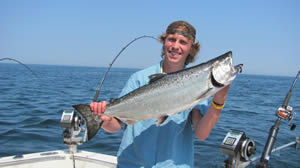 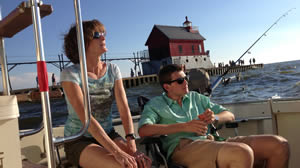 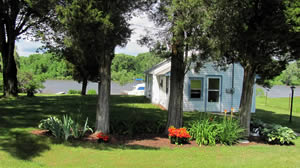 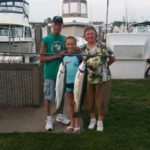 Had a great day with 10 year old Sydney and her Grandpa and Grandma from Ohio on Friday. She boated 2 really nice Steelhead after loosing the first one right behind the boat. Our hearts all sank after a fifteen minute fight and the steely spit the hook just … END_OF_DOCUMENT_TOKEN_TO_BE_REPLACED